some pregnant women aren't smug, and they have cool friends too 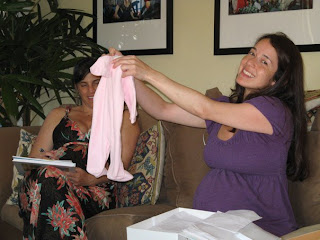 Have I mentioned she’s 37 weeks pregnant? Over the past 37 weeks, I’ve learned things like:
1) Even though non-pregnant people use phrases like “eight months pregnant,” pregnant people count in weeks.
2) The placenta is an organ that pregnant people’s bodies grow just for the purpose of being pregnant.
3) You can eat it.

This weekend I co-hosted a baby shower in celebration of the mama-to-be and the fact that she didn’t go into early labor, since we were cutting it a little close date-wise. We decorated bibs with fabric markers, which seemed like a nice alternative to weird baby shower games where you have to smell melted fake-poop chocolate bars in diapers. Although at least one shower attendee said she thinks that game is hilarious. I could get behind just eating candy bars. Not melted, not in a diaper. That’s my kind of game.

Jamie opened her gifts, including the uber-cute angel-wing footie pajamas above, and even though there was a lot of cuteness going on, there was no prolonged awwwwing. This was a cool group of ladies, the toughest ones being the two who were already moms. When Jamie expressed some nervousness about cleaning out the baby’s nose and ears during every bath, Michelle and Tiburon formed an aghast chorus: “Oh good god, no—that’s way too much work. If you just kind of dip the baby in the water, you’re good.”

The angel-wing jammies also led to some speculation about just how wild and non-angelic Jamie’s daughter might or might not get as a teenager.

After the shower, AK and I headed over to Exposition Park to meet Stephen, Pedro, Maria and Calvin for a night of Pulp Fiction and gourmet food trucks. Thus far, L.A.’s so-called gourmet food truck revolution has literally passed me—the only place I ever see those damn trucks is on the 10 freeway. But I got to sample some montaditos from Papas Tapas which were pretty good, but teeny tiny. I didn’t feel so devastated that they don’t park outside my office every day.

I only slept through like five minutes of Inception last night at the Highland Park Theatre. That’s appropriate to a movie about dream-walking, right? It was smart and interesting, but just like The Dark Knight, it took way too long to wrap things up. And AK and I agreed that there was a lot of unnecessary and ultimately implausible exposition about the dream world. Look, we’ve already accepted that people can invade each other’s dreams and plant ideas in their subconscious—just let our disbelief remain suspended and don’t list 25 rules about the three different layers of dreaming, okay?

Also, Leonardo DiCaprio’s storyline is so much like his storyline in Shutter Island that it made me miss that movie, which I liked better. But Ellen Page does have the cutest, gayest little walk.

Don't tell the food trucks that you can eat placenta! "Gourmet Placenta Quesadilla, anyone? It's the perfect breakfast!"

Jaime is still so cute 37 weeks into pregnancy. They're going to have a beautiful baby. :D

I nodded off for a min watching Inception too. It was non-stop intense. The music never slowed. Jeez! I feel like Ellen Page looks like she is 12. Adorably 12.

That smell-the-poo/candy game makes me throw up in my mouth.

I nodded off for a min watching Inception too. It was non-stop intense. The music never slowed. Jeez! I feel like Ellen Page looks like she is 12. Adorably 12.

That smell-the-poo/candy game makes me throw up in my mouth.