the revolutionary war inside me 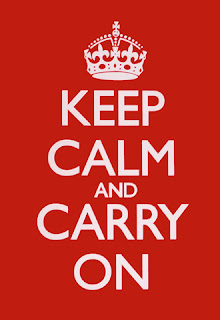 My friend Meg has this poster up in her office. Apparently the UK designed it during World War II for use in the event that Nazi Germany occupied England. You have to love the sheer British-ness of it, while simultaneously wondering, of course, what sort of situation would be helped by the government telling you to keep calm and carry on. Maybe if the disaster was something like the nation’s grocery stores running out of your favorite flavor of ice cream.

The sign has inspired many spoofs. It also got me thinking about how all my major internal battles are a war between my Brit roots and my American upbringing. My mom’s side of the family has been in the U.S. for almost as long as there’s been a U.S., although from the stories I’ve heard, I don’t think they were so much DAR types as the sort of people who started heading west with Brigham Young only to stop halfway, have a change of heart and open a bar. But my dad’s mom emigrated to the U.S. from England when she was about 11, and he spent his childhood in the company of stiff-upper-lip British grandparents (he much preferred his paternal grandmother, a warm Jewish woman who never met a recipe that didn’t need more butter).

I think some intrinsic British-ness got passed down to me—a deep-held belief that I should work hard, never brag and take all blows in stride.* To display or even experience unpleasant emotion is to fail embarrassingly.

The problem is that I’m also hopelessly American: a loud, emotive, O Magazine-reading optimist who carries on plenty, but not the way the queen had in mind. What’s a girl to do?

How about celebrate all that I love about America (our inventiveness, our hopefulness, our faith, our diversity) via a traditional Fourth of July veggie dog barbecue and then head out to England for a couple of weeks?

I’ll be traveling with AK, my sister, my dad and his girlfriend. My dad has never been before, and I hoped that pushing for this trip would be a way to spend some family time and connect to our roots. I thought it would be a nice thing to do for and with him. Of course, my dad being my dad, he exhausted himself in preparing (today he sent me an Excel file containing four worksheets worth of information) and insisted on paying for a bunch of stuff he shouldn’t. So I’m pretty sure he—rightly, perhaps—thinks of this as a nice thing he can do for me and my sister and his new daughter-in-Canadian-law. That’s very British of us, isn’t it? To plan an awesome European vacation and convince ourselves it’s a noble sacrifice.

Happy Fourth, my fellow Americans, and I’ll see you in a few.

*I realize that just because English people are white and I happen to be one doesn’t mean I’m not trafficking in crude ethnic stereotypes here. So apologies to all lazy, boastful, emotionally precarious Brits. I’m sure you’re out there.

I hope you all have a safe trip and a great time!

You have fun, and if you see a copy of that poster, I could really use the reminder. HINT.

Hope you have a great time digging for those roots. Love to everyone!

Great post! The heat has just started in LA, yesterday. Hopefully you're relishing some cooler weather if you're still in the UK.